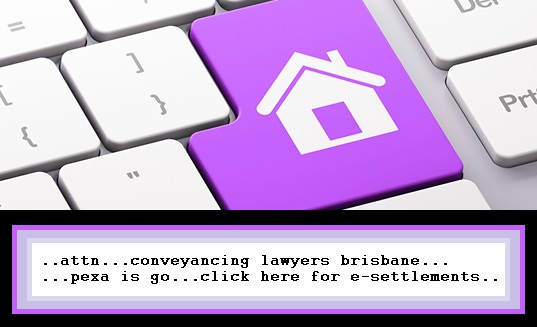 At present, PEXA is deliberately set up so that an electronic settlement cannot occur until the solicitors acting for the Buyer have set up details with the Office of State Revenue’s (OSR) online system regarding transfer duty for that specific transaction. This is not a bad idea in itself, as under a paper conveyance, the Buyers’ solicitors would set up the transfer duty details with the OSR prior to settlement in any case. However, in the case of our first electronic settlement there was a glitch in how the PEXA system communicated with the electronic system used by the OSR. For this particular glitch, PEXA, the Buyers’ solicitors and the OSR were able to work together to have the issue resolved prior to settlement; but for a considerable amount of time, it looked like the glitch would not be able to be fixed and the settlement would not be able to proceed electronically.

This issue arising has revealed the current two biggest problems with agreeing to settle a conveyancing matter electronically. The first is that the PEXA system relies on other electronic systems, such as those used by the OSR and the Department of Natural Resources and Mines (DNRM), to work seamlessly with the PEXA system. An arrangement like this is very achievable and other states in Australia already have these systems in place. However, for Conveyancing Lawyers in Brisbane, until either a considerable amount of time passes or the amount of electronic settlements drastically increases, it may take a while for any glitches in the systems to be worked out.

Despite the above, all other aspects of the electronic conveyancing proceeded without error and the benefits of electronic conveyancing were made very clear. As the Sellers’ solicitors, we received notifications from the PEXA system whenever items were required to be completed, communication in the online PEXA message system was seamless and our clients received the proceeds of their sale as cleared funds in their bank account within hours of the settlement occurring. It was also with pleasure that we watched the PEXA system notify us only two days after settlement that the property was already in the name of the new owners, as opposed to the two or three months that this can take to occur for a paper settlement.

Overall it is definitely still worth arranging conveyancing matters to settle electronically, both to allow practitioners and clients to become used to how electronic settlements proceed and to test the usage of the PEXA system. The above being the only main issues which arose in our first electronic conveyance shows how strong the PEXA system is already, and we have high hopes that with more usage in the conveyancing sector that it will only be a matter of time before glitches in PEXA electronic conveyances are a matter of the past.

« PreviousGet to know just us….Remy Forster
Next »“Sign the dotted line” – Indigenous Land Use Agreements after the McGlade decision